Truly a Green Lung, Even Today!

Truly a Green Lung, Even Today! 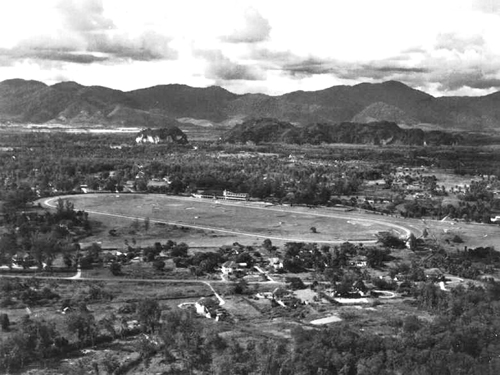 This photograph dates from the end of the war / January 1946 and was taken by a member of 656 squadron stationed at Ipoh aerodrome. It is of course the Perak Turf Club racecourse which was also used at that time as an extra landing place for the squadron’s Auster aircraft due to congestion on and damage to the aerodrome after the war.

As a green lung in our city it is pleasing to see that it is still with us.

The Turf Club in Ipoh has a long history, having started out in 1903 as the Ipoh Gymkana Club. However, By Kinta`s standards, the Ipoh Race Course was founded rather late. The Gopeng Gymkhana Club being founded in the late 1880`s and the Kinta Gymkhana Club at Batu Gajah in 1890.

The Perak Turf Club – My grandpa used to work there as the chief cashier until the early 70’s. His name was Mr Wong Hoi Hoong, and most people called him uncle Wong. My youngest uncle (kau-fu) Mr Wong Hor Yan William and my dad Mr Wong Thian Wai also worked there during the Ipoh Races, selling tickets?? That was in the 60’s and early 70’s. Does this ring?

That was why there’s a place called Lawan Kuda in Gopeng, it was derived from the old race course…

Another memory of my wonderful father who did so much to make Ipoh what it once was! My father, the Danish architect B M Iversen was sent to Ipoh by his firm Keys & Dowdeswell to work on the Perak Turf Club – he drew all the plans for the building and the interior details. His boss thought it was all a bit too modern but was satisfied! He designed the stables and the bungalows for the staff. He loved his job!