Some call it Perak’s version of “The Leaning Tower of Pisa”. I’ve never been there, but from recent pictures it does seem like it’s leaning a little to one side. However, here is an early 1900 picture of the same water tower in Teluk Intan (see below) – and it seems rather STRAIGHT to me 😉 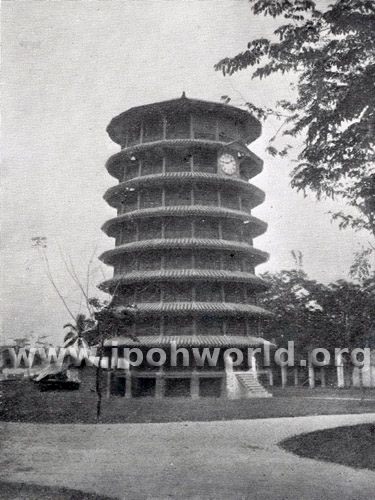 So, WHEN did this tower start to lean? We’d like to know MORE about this tower – especially from the Teluk Intan folks!

This three-storey circular brick was built in 1885 to house the town’s water tank. There are seven tiers of fringe roofs, a timber post-and bracket structure that gives the tower its pagoda-like appearance. An impression further reinforced by the us of Chinese half-round tiles and green glazed grills like balcony railings above the roofs. The clock was installed in 1894. I don’t know when it started to lean, moreover I am not from Telok Anson.

Oh, the tower in the picture is leaning.