Construction of a Palong was No Mean Task!

Construction of a Palong was No Mean Task! 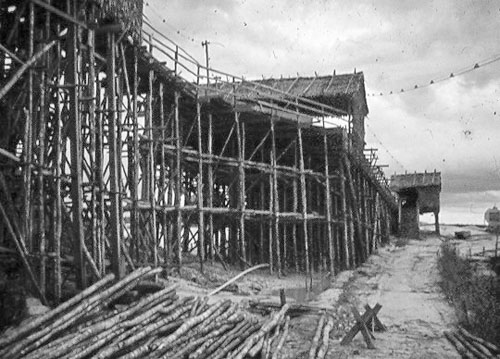 This is a picture of a three-lane, 1960s mining Palong constructed at Kampong Gajah, Perak. As can be seen this is a major structure all made from timber which was generally cut from the mining land before the actual mining started, as almost all of the land would have been originally covered by trees which had to be removed. A three-lane Palong was quite small as many of them went up to 12 lanes or later even 16.

The Palong is of course associated with open-cast mining and in this period meant the use of manhandled, high pressure,  monitors cutting the tin bearing ore from the land and washing it towards the gravel pump, for pumping up to the Palong. However, spare a thought for the men who built this structure, for once the monitors had cleared all the tin from the area they were working, the Palong had to be dismantled, moved and reassembled at the next mining area for there was a limit as to how far the gravel pump could be away from the monitors.

This mode of mining was eventually replaced by the use of excavators, tipper trucks and automatic monitors known as Dry-Excavating Opencast Mining, there being two great advantages to this, the Palong did not have to be moved and the automatic monitors could work for 24 hours, thus increasing the yield of tin ore.

Such a structure was known as ‘kam sun kou’ in Cantonese. I was familiar with such structures as I grew up in Guntong, now called Buntong, during the 50s.
Times had changed. With urbanisation such a structure is now a relic of the past.

Hi PT. would you happen to recall when Guntong was changed to Buntong?

can anybody explain to me why someone in authority would want to change the name please.

In 1952, Buntong New Village, like the thousands of other Chinese new villages throughout Malaya, came into being as a result of the Brigg’s Plan. Decades later the inhabitants were irked by the name ‘village’ as by then the villages had evolved into modern townships. So the term ‘new village’ was deleted. The pioneer inhabitants of Buntong N/V were once Chinese/Indian squatters living in Guntong and its surroundings. That area is present day Taman Rishah, Buntong Jaya and stretches to the foot of the Kledang Range. Guntong was then on the jungle fringes where squatters had built their homes and… Read more »

The timber used for the construction of the Palong supports were more often then not harvested from the land cleared for the mining itself. These long and thin trees were called “Loong Kuat” (Dragon Bone) by the local construction crew.

Happy to say we are still constructing the occasional Palong. See http://www.nst.com.my/nation/general/palong-to-bring-life-back-to-sungai-kinta-1.105000