A Most Unusual Mosque and a Great Restoration

A Most Unusual Mosque and a Great Restoration 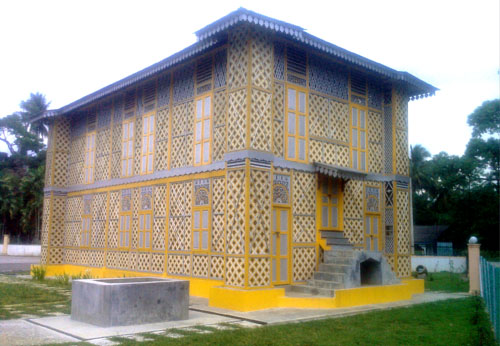 Perak has plenty of heritage buildings, many of which seem to be ignored by their owners or the government. But here is a wonderful heritage building for although not more than 100 years old it has just been restored by the National Heritage Department. Many will not believe that this building is a mosque for it is square, double-storey and without minarets. It may be the only one of its kind in Malaysia.

Kuala Dal mosque was built in 1936 by the village craftsman to an age old tradition and the upper storey was used for prayers while downstairs was a general purpose meeting room where apart from meetings, religous lessons were given to both adults and children and in the fasting month, the village would break fast there. The construction was funded by the 30th Sultan of Perak, Sultan Iskandar Shah who had seen the villagers praying in a dilapidated madrasah. It is very similar to the old palace, Istana Kenangan at Kuala Kangsar, woven bamboo in a diamond pattern as the photograph below shows. Sultan Iskandar Shah also built the new palace, Istana Iskandariah, in Kuala Kangsar. 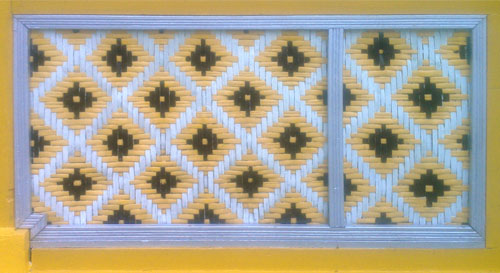 It is painted in the colours of Perak, black, yellow and white. Local suggestions include the idea that it is going to be turned into a museum or gallery to add to the attractions of the area, but that may just be hearsay for today there is a notice advertising an Umrah meeting which indicates it may still be used for religous purposes, in addition to the second village mosque built in 1976. Today it is locked tightly shut. However it is a fact that back in the 1950’s and 60’s many Westerners travelling on the old road to/from Penang would stop here for a photo session. Let us hope that after such a splendid restoration, good use will be made of the building and encourage tourists to once again stop for that memorable picture to take home.

If only the same care and restoration is done to all buildings in Ipoh….instead of greedy vermin tearing them down to line their pockets!

Stop uttering the nonconstructive comments but give some positive ones instead.

warmonger,
You should realise it’s impossible to save every building.Ipoh history could be saved by selecting key buildings and restoring those. That is somewhat possible.

Some background info on this restoration:
The restoration was promoted through Badan Warisan Malaysia, which awarded a grant to the students from Lim Kok Wing University to do measured drawings of the dilapidated building. It is noteworthy that a small dewan squeezed between the old and the new mosque has been demolished so that the now restored old mosque can take its place as the commmunity centre. The wall is made up of panels of woven bamboo called kelarai. Unfortunately, the colour scheme of its wall does not follow the original scheme.

What an interesting story is coming together here with the original blog and the background to the restoration as above. The other aspect of this post is how much of Ipoh’s heritage town buildings can be saved. It is obvious to all (apart from Warmonger it seems) that it is, as Sofia says, impossible to save every building, but who should select what can be saved and who can pay the cost? Furthermore wouldn’t it be better if an area was chosen, rather than individual buildings? How about Panglima Lane this blog has spoken about, or that street that leads… Read more »

Hey you guys, i stand corrected. Lets start some sort of awareness drive with ipohworld. What da’ ya all say to that?

Warmonger, Our main database at http://www.ipohworld.org/dbr.asp is designed to be a record of Kinta Valley’s heritage and social history. However, this blog is primarily designed to do just what you suggest – create awareness. Hence it has stories of collapsing buildings, renovations and anything else relevant to Perak and its heritage. So if you or anyone else would like to help us in this objective, please do not hesitate to let us know about anything newsworthy about heritage (via the Chatterbox top left or [email protected]). We shall also be happy to receive your photographs. Regarding the Louis questions, perhaps the… Read more »

With regard to nominations for preservation: you can nominate any building or item as national heritage. Go to the Jabatan Warisan web site and you should find a form. You can nominate your neighbours’ house, and even your own! Of course, consideration will be given to its architectural qualities, the history of its occupancy, authentic content, its heritage value in the context of our social history and its significance among our legacies. Recenly, the Jabatan Warisan, the Heritage Department in the Ministry of Culture, has funded several building restorations. The Taiping Sanitary Board building is up and running, privatised as… Read more »

Hello Jim and welcome to the blog!

Just wondering – would you happen to know more about this museum in Beruas? We featured it earlier at http://www.ipohworld.org/blog/?p=421#comments, but would be pleased to hear more about the history of the building. (Maybe have a picture or two as well?)

Does anyone have any pictures of or information about the two mosques Jim Joyce has mentioned above please.

To be honest the Beruas Museum was closed on the day I attended,but I am sure it is in the Registry of Malaysian Museums.The Mosque at Bagan Serai I have no pictures of but I remember how to get there,if it hasn,t changed too much.take the “Old Road” from Butterworth to Taiping,en-route you will cross over a ‘Bailey Bridge’ just after this you should come to a road branching off at perhaps 30 degrees to the South West,follow that road and you will find it.The Wooden Mosque,in Batu Uban is easy to find and I think,dates to 1755,or similar.Beruas was,once… Read more »

Daytripping in Perak: Heritaging sites in Perak: ambience, charm and history: observation, imagination, research, discoveries and interaction with the locals: explore and enjoy!

Thank you PHS (Perak Heritage Society?)for your helpful explanation of how to register buildings for heritage status. However, I still think it would be more beneficial for organisations like heritage societies to get together, come up with an agreed list and present it en bloc to the heritage department, rather than a lot of individuals flooding them with ideas like “Uncle’s shophouse” or “Kampong Gajah”.

And yes! I do care about the past or else I would not be writing on this great blog.

Thanks everyone for your thoughts. It’s turned out to be a very fruitful discussion. Thank you Jim, for the directions to the place too.

Hi
anybody out there can tell me where i can get ready made bamboo woven wall??? or any made to order, need quite alot of this wall for a project, appreciate if i can contact the manufacture . Thanks