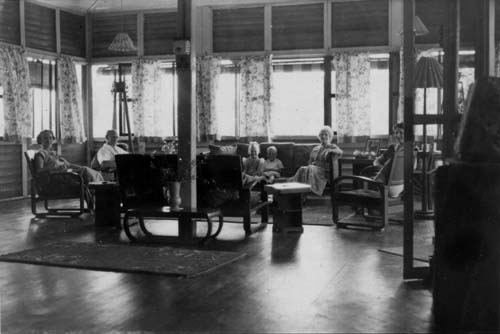 A E Walker, the Manager of Elphil Estate (Sungai Siput, Perak), was shot in his office by Communist insurgents on 16th June 1948. Walker’s murder and the murder of two other planters led to the start of the Malayan Emergency – which lasted 12 years; 1948-1960.

Here we have a rare photograph of the interior of the Manager’s bungalow. This picture was taken after Walker’s death, with who we believe is the new Estate Manager and his family. This picture is part of Arthur Waters’ collection; Arthur Waters was a former policeman who served during the Malayan Emergency. He now lives a quiet life in Sungai Lembing, near Kuantan.

What a great photograph.

I wonder what is left of the Elphil estate today and if any of the manager bungalows still survive?

There ‘s a similarity one still around, the internal design are likely still same
will explore there soon…

Hi Raz. Yeah, would be interesting to know if they’re still around. In some of these former estates, such houses are just left to rot. Pity…..

The bungalow no longer exists I am afraid and as far as we can ascertain there are no pictures of the outside of the house in existence, only one picture of the estate football (soccer) team with part of the house in the background. John McIntosh, the manager who took over just a few weeks after the murder of Wally Walker is featured in the team photo. Presumably therefore it is the McIntosh family that are shown in the photo featured on this blog. That makes our photo very rare indeed. All we know therefore is that this was a… Read more »

hi, Ika
“there are no pictures of the outside of the house in existence, only one picture of the estate football (soccer) team with part of the house in the background.”

as i could not find the Photo, ( Soccer Team with part of the house background) Could you be able to help, forward to me at [email protected].
thank you.

Since ika’s comment in 2010, we have obtained more photographs of the bungalow. Kindly find the links below.

Thanks, Christopher.
the link are Great &Photos, i am from Telemong Estate (1929) , Where A.E Walker was the manager before he was transfer to Elphil Estate in 194*,

Between 1935 and 1938 he worked with the London Asiatic Rubber & Produce Co. in Burma, and was then transferred to Malaya as manager on Telemong Estate, Karak, Pahang, where he was until interned by the Japanese.

Hello, my grandfather Colin Campbell was a rubber planter at Selaba, Sarasawatti and Hamiltonia estates near Bidor and run by Harrisons and Crossfield from the early 1920’s until 1942.

I would be very grateful to hear of any information about him that you may have. Thank you, sincere best wishes, Judy Campbell.

Thanks for the enquiry, but at present the name Colin Campbell does not ring a bell. However that does not mean that we cannot search for you. Do you have any more information available that would help us do that, please?

Judy, So far we only have one reference to your grandfather as published by the Straits Times on 29 July 1925. It is in the Social and Personal Columns on page 8 of the newspaper and reads:

We look forward to hearing more from you.

HiJudy,do you have any news about TALI AYER ESTATE,PARIT BUNTAR,PERAK(KERIAN DIST).who was the first Planter and the pioneer in the estate

I am writing a New Zealand Jerram family history which includes a biography of Maurice Jerram. He was Manager of Ephil Estate from late 1948. After their son was born 01 April 1949 he relieved at other Estates but had returned to Ephil by the birth of their daughter 02 Feb. 1951. The photo could be Maurice Jerram and family.

Hi there,
I have just stumbled across this photo of my grandparents, father and aunt. This photo definitely includes Maurice Jerram and his wife Peggy (both on the left) and two kids William and Wendy (couch). However, I am unsure who the other two images are of (right).
Wonderful to find this picture!
Amy

Welcome to the blog, Amy 🙂

Hello Tim and welcome to ipohWorld. Do you by any chance have a photo of Maurice as we have the original of this photo and may be able to blow it up large enough to do a comparison.

Incidentally, if you have other Perak photos we would love to share them with our readers and a scan of them at 600dpi would be great. Our email is [email protected].

I was interested to see the name Maurice Jerram. I’d be interested Tim as to what you’ve found out about his war service. He was an Assistant Planter on Pegoh Estate and joined the Johore Volunteer Engineers. Seconded to the Mysores, he reportedly got away in a small boat after the capitulation of Singapore.
You may be interested, Tim to view our Malayan Volunteers Group website.

My father Roderick Alastair Caldwell built and then ran the Palm Oil factory at Selaba Estate Teluk Intan in the last 50,s early 60,s .I am planning a trip back to Malaysia in JUly 2013 to visit some of the places important to me from my childhood.I shall be in Teluk Intan on July 19th. I am having difficulty finding a contact number or email for Selaba Estate and would love help if you could .I also want to visit my old school The Convent of the Holy Infant Jesus in Teluk Intan and also Batu Gajah where I was… Read more »

thank you Haji Meor. Anyone wanting to know more, could probably contact you…

Lovely to find information on this estate!

I’m looking to travel to Malaysia to try to follow the course of the Emergency in memory of my Grandfather who served in Malaya, and the obvious place to start would be Sungai Siuput. Do you know if Elphill or the Sungai Siput estates cn be visited at all?

I have an elderly friend who was born in Ephil in 1922, I believe while her father was manager of the Ephil Estate. I think his name was James Marshall. He died in 1941 on the estate and is buried in the area. His grandson and great grand children visited his grave during 2016. His daughter was sent back to Scotland at the age of 5 and has never returned. Her mother left Singapore on the last ship out before the arrival of the Japanese. I wonder if there is any record of James Marshall?

I have a great uncle who died at the Selaba Estate I think in 1952 (Albert Nightingale). Would you have any more information perhaps?

From above: Walker’s murder and the murder of two other planters led to the start of the Malayan Emergency And from database item 2942: The murder of Mr A E Walker by Communist insurgents was one of three that took place on 16 June 1948. […] It was the murder of these three planters that caused the government to declare a state of emergency that lasted from 1948 to 1960. On the same day in June, 1948 that certain opponents of the colonial regime killed the three European planters, they also killed two other men, both Chinese. One was killed… Read more »