…a Mystery no more!

…a Mystery no more!

Most of us are familiar with the Birch Clock Tower (along Post Office Road). In one of our previous posts, we were wondering what building seemed hidden in the background, far left of the picture (see below). 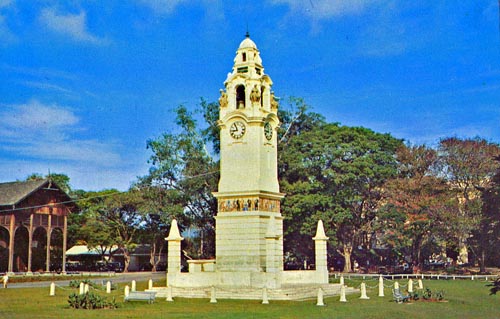 Well, the mystery has been solved – the building is none other than the old Court House! 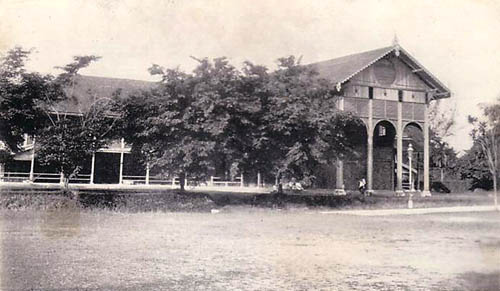 Yes, this was what the court house looked like in the late 1800s. This court house was built in 1888 and remained a court house till 1909.  The court moved to another location, but later settled at its present place – Club Road. This structure, however, remained there till the 1960s; it later paved way to the construction of the Perak State Mosque.

Is this the building that was once St John’s church please?

Hi Louis, if I remember right….St John’s did use the court house for their Sunday worship. this was before the present church was built. that said, this old court house was probably St John’s church at one time.

What a revelation! Didn’t know that there was an old courthouse (perhaps a former church) beside the clock tower.

yes Aaron…there are a LOT of mysteries withing Ipoh…. 😉

The road between the clock tower and the state mosque, Jalan Dato Sagor, is quite inclined, but it does not seem so in the top photo. Maybe it is just the perspective of the photo.

In the photo (to the right of clock tower, in the background behind the trees) I cannot make out if the old post office (part of the Ipoh Town Hall) was already built.

Hi KKFoong. if the top picture was taken in the early 1920s or so, then the old post office was already built. to what I recall, both the Town Hall and the Old Post Office were built between 1914-1916…

Felicia: I agree with you, construction of City hall and Ppost office began in 1914 but the shortage of materials and high costs of labour caused by World War I delayed its completion until 1916. The contractor was Lim Weng Ching. So by 1916, the building was already there.

During the 1950s, before the Perak State Mosque was built there was a wooden building between the clock tower and the Perak Police Headquarters used as the Perak Road Transport Department. Could it be the same building shown in the photo.

Joharee, the wooden building you mentioned could very well be the Old Court house! this building remained there until it was demolished – to make way for the State Mosque.

When I went for my scooter test in 1963, it was conducted in the old wooden structure still.

I’ve seen this building (the wooden court house) in a newspaper article while I was perusing through a large collection of microfilm in the National Library of Singapore, Victoria Road.

I can still can recall, there was a group photograph in front of this court house.

Thanks for the old court house opposite birch clock tower picture. I be looking for this nostalgic pic. for a long time! Today, i’m glad with this post..thanks a lot.

So what about the old post and telegraph office?(wooden structure) Could anybody tell me which exactly the location is?

Joharee asked two questions: During the 1950s, before the Perak State Mosque was built there was a wooden building between the clock tower and the Perak Police Headquarters used as the Perak Road Transport Department. Could it be the same building shown in the photo. Yes. After housing the courts (and the church), the building was home to a panoply of government offices, finally including the Road Transport Department. So what about the old post and telegraph office?(wooden structure) Could anybody tell me which exactly the location is? Yes. Imagine a square bounded by (1) on the west, the old… Read more »