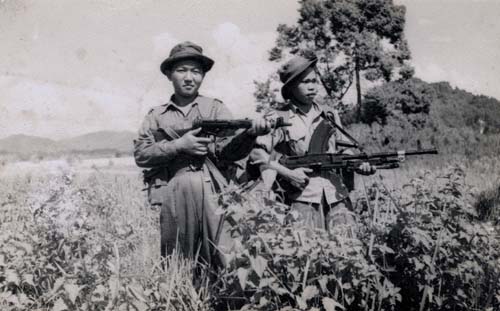 The Home Guard was part of a defence strategy during the Malayan Emergency. Their role was a ‘static local defence’, and ‘manning of checkpoints’ to cut of supplies to CTs, particularly in the area of the New Villages. The Home Guard were said to release the police and military for counter-terrorist ops.

Here we have two women from the Kinta Valley Home Guard, taken on the 2nd of March 1953 (the one on the right is holding a Bren gun). These were trained at a camp in Ipoh and were specifically for guarding the tin mines in Perak. They were all Chinese and founded by Towkay Lau Pak Kuan, as President of the Perak Chinese Tin Mining Association, with permission from General Templar, the British High Commissioner. Formed in 1952, some 4000 members were recruited, trained and armed by the government. In 1954 it is recorded that 323 different mines were defended by this “Chinese Home Guard”. They were operational until the end of the Emergency.

Now that’s what I’d call ‘Hot babes’!Cross ’em and the Bren and Sten will blow you away…

Now there are two Ladies whom,I hope,went on to produce and care for Families,but felt,at that point in time,that they had an obligation to the Community and indeed the Country.So we see it wasn’t just the ‘Troops’.The sten? maybe you would stand a slim chance,the bren,in the hands of someone who knew what they were doing,you would become,like Swiss Cheese.Not Hot Babes,at the receivng end.

A lot of people do not realise,and if I may quote the Late David Niven,who went ashore on D-Day,”That people who say that they heard bullets whistling or buzzing around them,have never been shot at” A high velocity bullet makes a very nasty CRACK and,speaking for myself,the noise has a tendancy to make your knees turn to rubber,your mouth go dry and the wish,if laying down,that you could dig a hole to China.

I never realised that we had female Home Guard personnel during the Emergency. When did we start to get female police officers?

Hi Louis. If remember correctly, women were first recruited as ‘searchers’ (to search other women and children) at stops / checkpoints, during the Emergency. It was later, around the time of Malaya’s Independence, that women were officially included into the Royal Malaysian Police force.

You could do a quick search at our main website http://www.ipohworld.org

Louis, why not start by looking at http://www.ipohworld.org/search8/result.asp?strid=3792

My father was a homeguard in the Kinta District in the 1950s guarding the Tin Mines.I am not sure if it was a mandatory callup of young able-bodied youth in defence of the nation. But I do remember he was away for more than a year and seen some action.

Hi Cheah Kok Yoon. Thanks for sharing that with us.

Hi Cheah, Thanks for the memories, but I feel that I must ask if there are any photographs of that period among your family members? We always need more photos and stories to keep this blog lively and the main database at http://www.ipohworld.org a useful tool for education.

Thanks Felicia and ika, I looked at the items on the Police and am surprised by the detail you have. Policewomen in Perak so long ago. I never would have believed it!

Does anyone remember me? Or my father?
I was the daughter of Capt B W Stedeford who was killed in Ipoh in 1950.
I remember my stay in Ipoh SO well.

And I recall the friends I made at the Convent of the Holy Infant Jesus in Ipoh.

My father is buried at Batu Gaja

I hope this gets to you. I have an item issued to your Father while he was in the army.
I would love for it to be returned to your family.

Wah, Caroline Lee, Thanks for bringing up this article. I must have missed it way back 2010. Didnt know we have tigresses as Home Guard in our midst.
Wonder if they are honorably decorated & recognised or if they have a Memorial Graves for them in their course of their duties.
Does Malaysia have Memorial graves for Malaysian Soldiers who died in the war. I have seen War Memorial Graves for Commonwealth nations but not Malaysian . Maybe some readers like to share.

My grandfather late T.N. Balakrishnan was active police Inspector with the Kinta Valley Homeguard. I have a memorable collection picture of him, (with the details that he has written at the back with his own writing) which was taken in front of his troops during 1952-1954, the 1st Malayan Emergency. He was an active member of the Kinta Valley Home Guard. This operation was conducted and monitored by Sir Gerald Templer, whom was the High Commissioner and Director of Operation. The Perak Home Guard, also played an important role in protecting the Chinese Tin mines in Kinta Valley, in Perak… Read more »

Suriya, I have emailed you as requested but worry about the fact that you have posted your phone number. I do hope you do not get any crank calls. I can always delete it for you if you find it is a problem.

I do hope we can share the photo with our readers.

Sometime back I was informer of a Yahoo Group site called Templer’s Boys. An elite and special team set up by Sir Gerald Templer during the early days of the Malayan Emergency. My old friend, mentor, and teammate from the Perak Shooting Association’s Small Bore Rifle team, the late Mr Bernard Thong Kwong Sin, was one of Templer’s Boys. Unfortunately, this group site has expired, and I have not been able to find any other information or details on Templer’s Boys. Can anybody out there please help!!