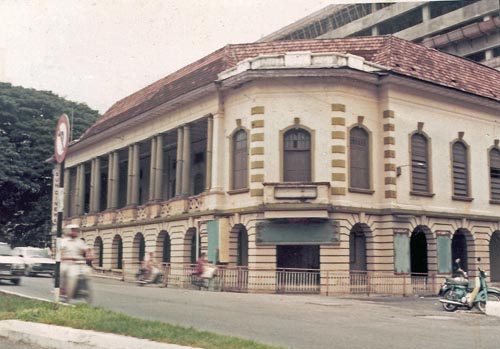 …the Sun Cinema was still in one piece!

This picture we have here is from around 1985, a little after the Sun Cinema closed its doors to the public. It was located at the corner of Brewster Road and Hale Street (behind the building was the Kinta River). Incidentally, sketches of this cinema were done by our very own cartoonist Lat (in ‘Town Boy’).

Built in 1917 as the Oriental Cinema, by Leong Eng Khean (the son of Towkay Leong Fee), it was leased in 1920s to Run Run Shaw (of the Shaw Brothers). Shaw renamed it the Sun Cinema. Meanwhile, the Oriental Cinema rented the Harima Hall (1910-1917).

Sun was managed by Ho Ah Loke and in November 1929 showed ‘The Rainbow Man’ – the 1st of the “talkies” (movies with sound). ‘The Rainbow Man’ used a travelling movie company; after its success, Ho Ah Loke installed his own equipment. By the 1930s, Sun was deemed the most modern “talkie” theatre in Malaya!