Here we have two pictures from S Y Lee – teams of the Perak Chinese Recreation Club, Chung Thye Phin Road. You will notice the old wooden building in the photo of the footballers. The present building is quite ugly but functional and built at the minimum price. 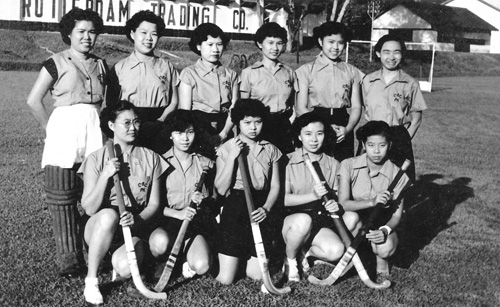 SY says: “For the ladies hockey team, I can only remember Ms. Lim Suan Gaik who is standing at the extreme right. She is still around for I saw her a few days back. I remember the Ooi sisters, there were three of them but I can’t remember who are the ones in the photos.” 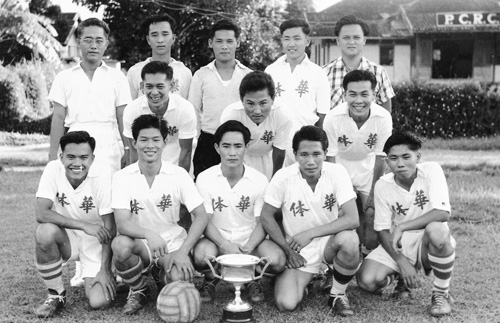 And for the photo of the footballers he says, “I know some of the nicknames but not the actual names except for Mr. Yee Seng Choy, who represented Malaya or Malaysia. He was recruited to Hong Kong as a player. He is second from the front row. Second from the extreme right is Mr. Wong Kam Seng, another national player. My father, Mr. Lee Kang San, is standing at the extreme left.”

Does anyone know more names of these star players, or more about the Recreation Club? If you’re one of them in these pictures, we’d like to hear from you too 😉

Seng Choy was my football idol between 1960 and 1962. He later worked and played for NEB, the forerunner of Tenaga Letrik Malaysia. I last saw him in the early 90s when he was a taxi driver waiting for passengers at Medan Kidd Bus Terminal in Ipoh.

Kung Hei Fatt Choy to all. Wow, this is all before my time and very interesting. Thank You for this peek into the past!

Thanks for these names SY, we do like to be as accurate as we can when we add the blog photos to the database archive.

I am not sure about the spelling though. Mr. Wong read out the names to me in Chinese and I did a literal translation.

As for the lady hockey players, I made a mistake. It was the Ooi sisters and not the Ang sisters. This was confirmed by my uncle who was a football and hockey player and a member of the PCRC. I have given you/Ian a write up-up on the PCRC. I hope you will update your data base on that as from a Google search, there is a dearth of data on PCRC.

Confirmed we shall update our database when there is a spare moment or two.

Does anyone know more […] about the [Perak Chinese] Recreation Club? I’m not sure what information is needed but what follows is some of what I can recall. The Club was founded before the Great War, probably in 1913. If there was one person responsible for its founding, that person was Khong Kam Tak, who had moved to Ipoh from Penang the previous year. In Penang, he had been a member of a similar club and when he arrived in Ipoh he decided to replicate it. Kam Tak asked for, and received, the support of all the following: Chung Thye… Read more »

Thanks for the information Ipoh Remembered. Rather than add it to an existing article on the database I believe it should have its own stand-alone article and will endeavour to produce one.

I wish I had an old photograph you could use for a PCRC entry in the database but, in the absence of that, perhaps one or both of the photographs donated by S Y Lee could be used. Meanwhile, I did remember some other incidentals. You may have noticed that, with good cause, the Club’s building and its official address are on a lane named after Chung Thye Phin. On the other side of the club grounds is a road named after Lim Seng Chew, who was one of the Club’s early Secretaries — perhaps even its first. (I’ve mentioned him before… Read more »

Re Chung Ah Ming, I shall b delighted to put together an article on Chung Ah Min based on your photograpph. Thanks for the offer.

Two other things, IKA: I just now noticed your comment: You will notice the old wooden building in the photo of the footballers. The present building is quite ugly but functional and built at the minimum price. When you say “the present building” you must be referring to the last building the Club erected at the present location, off Chung Thye Phin Road. Some people may not be aware of the Club’s prior location off Brewster Road (which itself is not much older than the Club). Also, I just now noticed in the first photograph that the Rotterdam Trading Company… Read more »

Thanks for the additional information Ipoh Remembered. I manged to validate your previous comments and have started to write the article. It should appear sometime next week.

How interesting ! Never know this club existed.
I only know of one PCRC ie Penang Chinese Recreation Club.
Is the Perak CRC still active ?
Ipoh Remembered – Sharp eyes that pointed out Rotterdam Trading Company. That too I havent heard of it. A google search drew blank.
Ipoh Remembered – Looks like you are an Ipoh walking encyclopaedia. How did you managed to keep so much information in your sleeve ? David Copperfield or David Blaine in the making ?

As for the Rotterdam Trading Company, if you are looking for more information about it you can also search under its formal corporate name, which was Internationale Crediet- en Handelsvereniging “Rotterdam.”

Thank you Ipoh Remembered.
Your are a Gem.