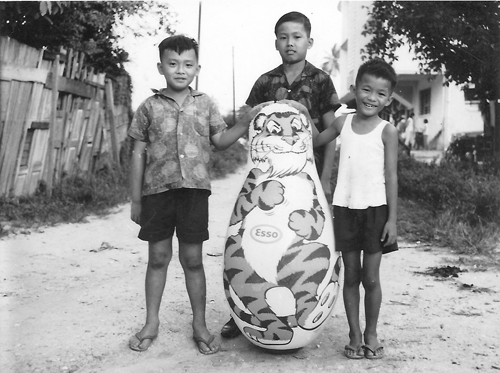 We received this photograph from Sophie. It was probably taken in 1969 and those in the photograph (left to right) are Sophie’s brother, cousin and neighbour. She also told us that:

“The boys are standing facing my house in Jalan Pasir Puteh…..the building behind them used to belong to the late Dato Cheah Fah”.

And what about the toy? Some of you may recall Esso giving away these ‘tigers’ to customers, probably upon purchasing a certain amount of petrol. Did YOU have such a toy? Perhaps some of you had a little ‘collection’ of such toys 🙂

I recall that these toys were first distributed in 1963 / 1964. Inflated and lightweight, we used them as punchbags for practising jabs. Of course, true to the principle of tai chi, they bounced away at the lightest touch. Thus they were quite durable as they never took in the full impact of any punch.

I wonder in what other ways is this toy used as a form of entertainment.

Whereabout in Jalan Pasir Puteh was this photograph taken?

I had one and as a kid who was growing up in the early 80s it is interesting to see that the toy have been around since late 60s. Their tagline still stuck in my head until today. “Put a tiger in your tank”. It could be a benchmark for good advertising. Same goes to Unggulaku Nallathu … LOL

This toy in Mandarin is called “pu tao oonk” (cannot fall down doll).. It was introduced to Malaya around 1952. It was not as big as the tiger shown in the picture. If my memory is correct (which I sometimes doubt), it came as red colored female doll with a scarf on the head painted on. My grandfather owned a shop that sold cloth, other western goods and toys. As a child, I used to test all the toys that came in the shop. It was probably “Made in Japan”. Cheaper goods were later made in HK then PRC when… Read more »

i remember having one of this ,probably in 1969 also,use it as a punching bag after watchins ultraman.

Oh mine! My most memorable childhood toy! I must have punched it 1000 times!

Memories of my childhood in the 60’s punching, kicking and throwing that toy around. The base was filled with water.

Had one when I was a kid,had fun kickin it & punchin it after watching ultraman and such….god I miss those days…

Notice the footwear. Except for school or work, when shoes were worn, it was the ubiquitous ‘slippers’ for the young and old. The other common footwear would be the wooden clogs. This was more common around the wet markets as the height of the clog kept the wearer’s feet well above the dirt and mud! Besides, the slippers had a tendency to splash water and dirt back on to your legs when walking on wet ground! I do believe that both have their origins in Japan.

Yeh, I had one of this good quality ‘tiger’, too! Was In the 1960’s. My late grandpa was a loyal Esso customer.

Hey, I used to stay in Pasir Puteh too, the corner house (now abandon) directly behind the bicycle shop (still there) 🙂 We stayed there from 1973 till 1980……….maybe I know Sophie 🙂

I used to knock friend’s one coz I did not have one before! Kind of dumb to hit it hard n it hit back hard on you! Hahaha! Especially if one is shorter than it! Wheee! Fun! Ouch!

Yes, the bottom has a compartment that when filled with water, it will always end up upright. We took ours the the Ipoh Swimming Club to carry out an experiment! Lo and behold it even stands on water!

I had one of those roly-poly from Esso then. Real fun punching it.