Ipoh’s Little India to be “Spruced Up”

Ipoh’s Little India to be “Spruced Up” 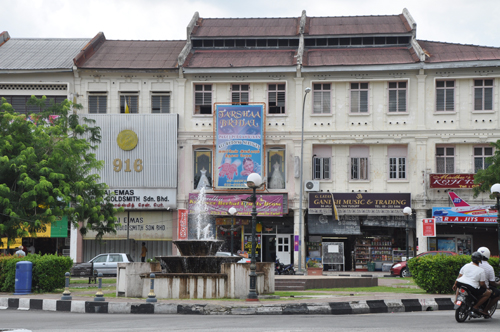 The Ipoh Echo recently reported that Ipoh’s Little India is to be spruced up. The work is to be completed before Merdeka Day on August 31. The area being spruced up under a project financed by the Federal Government covers from the entrance of Jalan Leong Boon Swee into Jalan Lahat and carrying on into Jalan Sultan Yussuf (Belfield Street) up till the intersection with Jalan Sultan Iskandar Shah. The idea to give a facelift was mooted when the Deputy Prime Minister Tan Sri Muhyiddin Yassin visited the area last year and approved a RM1.5 million grant for the facelift. Plans for the facelift was drawn up by Ipoh City Council and presented to the residents in the area at a dialogue held last month to explain the changes about to be undertaken and to get their approval.

Among the changes to be made are replacing the interlocking bricks of the present pavements, laying interlocking pavers with motifs characteristic of Little India on the roads, installing decorative lamps and landscaping of the entire stretch. An arch will also be erected at the Dataran Little India (the small square in the centre of the area).

Blocks of shop-houses within Little India will be painted with its original colours once all the rest of the sprucing up work has been completed.

Having read all of that I thought it would be usefdul to post the above picture of the square as it is today so that we may gain a comparison with the finished job.

And this is what the same place looked like in 1948.

Wouldn’t it be nice if all those terrible advertising signs be removed and the building allowed to show off their new paintwork as they originally did.

it’ll be good if they can restore the same fountain as in the old photo.. as compare with the current one …

According to the press there will not be a fountain, but a stage instead. I am sure the end result, with police pondok, new arch and the stage, will look nothing like the original. In Ipoh we just do not seem to understand the difference between restoration and renovation! As I said once before on this blog: In simple terms restoration means to return something to its original state (as near as possible) while renovation allows one to change, modernise, adds bits and pieces and generally end up looking nothing like the original. A good example would be Elizabeth Taylor… Read more »

Well, I’m a fan of restoration over renovation, according to Ika’s definition of both. Renovation need not be a total facelift, it could be a tasteful dressing up of the place and give it a new life.

However, looking at the countless examples of how our government tend to upgrade places in Malaysia, I would say restoration (without trying too hard to add anything new) would be a safer bet than renovation.

In that aspect, I fully go for restoration. At least it will not go too far wrong. Haha …

they should be restoring the fountain instead of tearing it down. a stage would only be used when they set up those stalls during Deepavali – it would just be a waste on other days!

Hope they restore the fountain.

I think they must be out of their mind to replace a fountain with a stage! And putting a police pondok there? I am incensed but I can’t help laughing at the stupidity of those who came out with this idea.

Exactly whose approval they got? The whole thing sounds fishy.

Ipohgal….you’re not the only one wondering…… 😉

Oh dear! Latest news in ipohecho news. They have built a toilet in that center and irked the business owners around it. What more can we say about the mentality of the planners. The worst insult to a landmark.

Maybe the government have got a private line to the head of UNESCO who awards heritage status and just loves modern concrete s********s!!!!!!!!!!

When I was a little boy, my late father use to take me along when he visits his close friend Dr.Patwardhan. Dr.Patwardhan operates the “Lee Clinic” at 35, Belfield Street. The clinic was right opposite the memorial fountain. At present it a spare part dealer shop. His son Ajit and me, we use to cross the road (not busy then) and play around the fountain. It was a public area where people use to gather around those days. I can’t imagine now its gonna be a public toilet. I hope all the traders living around there would stage a massive… Read more »

Hi Sundralingam….i’m just wondering WHO approved the fountain being turned into a public toilet? it does sound quite ridiculous

Hi Sundra, thanks for the memories of playing around he fountain. Will they be included in your reminoiscences of growing up in Ipoh for “Ipoh My Home Town”?

Hi, I lived on this street right up to 1999. It was not an area associated with the indian community. It was fairly mixed racially.

The toilet replaced the fountain. The fountain was not even the original fountain. This they call progress. Anyone remember the beef balls mee on the veranda of one of the nearby shops? I used to go there. The table was located next to the drain but I did not smell the aroma of the drain as I enjoyed the beef balls (both the big ones “tai yeen” and the small beef balls. Once, when I took my girl friend there she did not complain. Now years later, when she is my wife, she still complains that the table had a… Read more »

Hi SY Lee, do you remember where exactly this noodle stall was?

Cannot remember. This was more than 25 years ago.

What is the memorial fountain? Can anyone explain the history or story behind the fountain?

The all-marble memorial fountain at the southern end of Belfield Street, was erected by the Ipoh Chinese business community, in memory of E W Birch, British Resident of Perak from 1905-1910 and son of the first British Resident J W W Birch, who was assassinated by the Malays. EW Birch was a popular Resident who worked closely with the local towkays for the betterment of Ipoh. He passed away in 1929. To read more about this click on http://www.ipohworld.org/search8/result.asp?strid=1583

Heritage is not just about preserving old buildings and monuments. What defines a place is its Cultural Heritage. Whatever you see is a result of that. Cultural Heritage is a living thing, it evolves. This area was not known as “Ipoh’s Little India” in the past. Due to it’s location there was a good mix of businesses run by all the different races. Due to the demise of Tin Mining and it’s related industries like foundries, blacksmiths and other engineering services, the many Chinese run hardware, spareparts  shops and industrial suppliers closed down. Since then, many of the shops have… Read more »