The Times of Malaya – The 1st and 2nd Building

The Times of Malaya – The 1st and 2nd Building 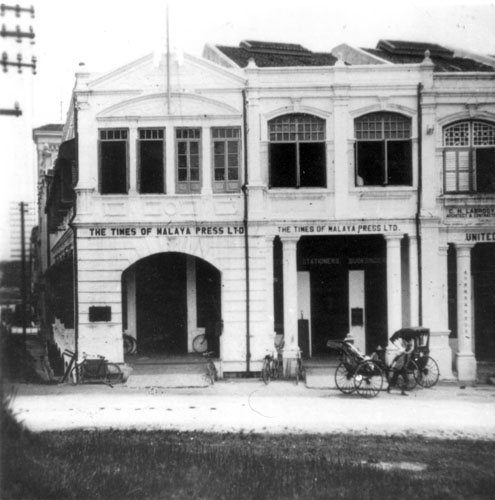 This is the first Times of Malaya building, which was along Post Office Road. The first issue of Ipoh’s first newspaper was published on 9th March 1904. 2 years later, the newspaper was taken over by J A S Jennings – who remained the paper’s most influential editor for a good 30 years!

In the early 1930s, the Times of Malaya moved to a new building, along Brewster Road (see picture below). 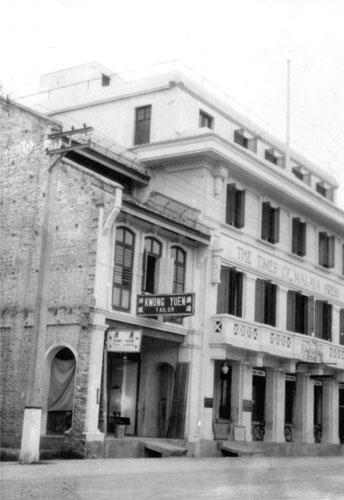 After the war (after 1945), this building was used by the Public Works and the Department of Drainage and Irrigation. What’s become of it now? Can anyone fill us in on the latest?

We thank Nicholas Jennings – the grandson of J A S Jennings – who sent us a copy of these rare pictures.

if I am not mistaken…Maju Perak is the present tenant now.

Where is Post Ofice Road today, and are these buildings still standing today? Thank you.

Post Office Road is where it always has been (HaHaHa) but they have renamed it twice, first Jalan Dewan and then Jalan Dato’ Sagor to commemorate one of the murderers of J W W Birch on which Road his memorial clock tower stands. The road on the other side of the tower is also named after one of the same assassination team, Jalan Dato Maharaja Lela. This was once called Station Road.

Sorry – to add to the above, the first TOM building was taken over by the Chamber of Mines and then demolished to be replaced by the LaBrooy building.

The second building still stands and can be recognised by the crest at the top of the facia which reads T O M.

This building now is occupied by Yayasan Perak at Jalan Sultan Idris Shah. The emblem of The Straits Times Malaya remain.

It’s unthinkable that they should name a road after a murderer and disheartening that all the roads named after our original founders who have contributed so much to the development of modern Ipoh has been omitted or systematically erased.

I do hope that all the original colonial names to be reinstated and not only that, a small plaque commemorating their contributions to be erected beside the road sign. That way we will know more about the history of modern Ipoh.

Our history and our legacy underpin our culture and civilization. From time immemorial, we identify individuals who had contributed much to society. In commemorating them, we not only celebrate the success they had helped us to achieve but also hold them out as role models to exhort the younger generations to strive for greater heights. After all, “Greatness begets Greatness” and the past is the key to the future. Going by the way history is viewed and being taught / indoctrinated in schools, the translation into action which we decry, started a few decades ago , will continue, unlikely to… Read more »

Aaron, while others may see Dato’ Sagor as a murderer, most Malays see him as a Malay patriot who stood against and killed a White man who humiliated the Malay sultans in the Pangkor Treaty. In this case, there is no right or wrong but just leave it to history. The frenzy of renaming roads that bore colonial names started during Mahathir’s time, in order to “Malaysianize” and instill patriotism. This was plain stupid because he wanted to break a link which can’t be broken. Changing road names also disregarded the important contributions that some of the persons whose roads… Read more »

I “sokong” this, Steven!

At times they have taken nationalism too far to the extent of disregarding history. There is always the opportunity to remember local personalities. For instance, new roads, new buildings, new schools can be named after them.

Actually Steven, it’s not the work of Tun Mahathir but the state’s own governing elite that was guilty of doing that. There’s that one former MB who came from the exact area of Dato’ Maharajalela’s birthplace (probably directly related to him also) who was the one who made all the name changes in one swooping move. If it were Tun Mahathir, then you would have seen the same fenomena taking place in Penang & Melaka which did not ! So, it’s not Tun. Tun’s idea of patriotism is much nobler and profound that goes beyond namesakes, logos & mottos. It’s… Read more »