The Memorable School Trip – by IpohBornKid

The Memorable School Trip – by IpohBornKid

Here’s another little sharing by IpohBornKid, about a school trip to Penang with his friends! 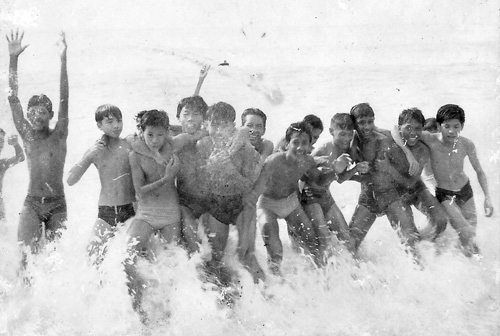 This picture was taken in the 1950s where Mr Quah Kuan Teik took a bus load of ACS boys to Penang.  It was a most memorable trip and of course, we gave the old boy heaps but he remained firm and show exceptional tolerance to all of us.  For example, when you go to sleep at night, someone will squeeze some toothpaste in your mouth.  On the journey to Penang and back, there were no toilets in the bus (an old ACS school Bus) and the boys would literally go to the back of the bus and “washed” the windscreen of an unfortunate car following behind the bus.  If any of you recognised yourself in the photograph please own up.

Mr Quah also told us the story of how some of the boys were lost during the night on a trip to Emerald Island, an island west of Pangkok.  Those adventurous ACS boys decided to venture across the island through the thick growth and into the other side.  There was a big panic, alarm bells were raised and search party was organised.  The boys were finally found safe and sound.  Any normal teacher would have said ” I had enough of the buggers, no more trips for you fellas”.  No, Mr Quah totally forgotten what had happened and continue the next excursion as if nothing had happened..

On an excursion to Cameron Highlands, Mr Quan took us to visit a vegetable farm.  One is supposed to ask the farmer to cut the cabbage if you want to buy it (only 20c each).  No, ACS boys were different.  Several boys gave a swift kick at the cabbage and it rolled down the hill until it hits an embankment.  I cannot remember whether they eventually bought the cabbage. 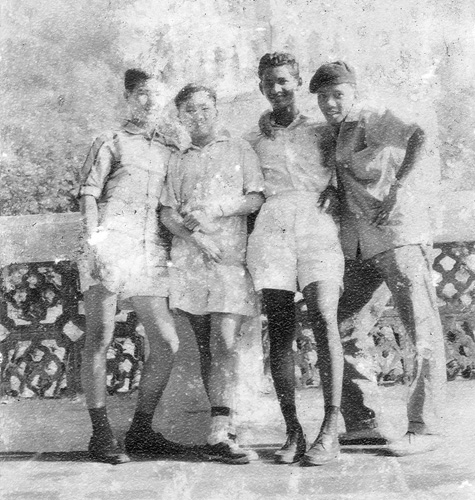 Nicky Chin, Mano, Me and Z.. : off to Penang we go on an ACS Excursion,  if you see yourself in the photo, please hands up.

Hi AP, Thanks for the great stories and the photographs which portrayed well some high spirited boys of ACS Ipoh of which there were many, certainly up to my time there and beyond. Their escapades continue, I hope, to these days 🙂 Mano will be seated with us at the Annual Alumni Dinner this Saturday, 6 August. I will definitely draw his attention to your posting. Mr Quah Guan Teik was the ever affable, unflappable and perhaps over-indulgent master whose understanding and empathy touched us all. I did not go on any of the trips led by him as I… Read more »

Yes, I remember Mr. Quah Guan Teik well as he was my form teacher when I was in Form Two 1968. A kind person and lived close to my house in Pinji Park. He has retired from ACS Ipoh in 1970 and would be 96, if this affable person is still alive today. He was indeed an exceptional teacher and role model, whose inputs have helped to shape my outlook and value system in life.

AP / LMS136, Maybe we can have some sharing of joyful momemnts at the coming dinner on this Saturday.

Hi Lms, I had planned to come to the OBA dinner, but somehow the travel agent screwed up my schedule but I shall return in early November this year. by the way, it is Nicky Chin not Eddy in the photo with Mano and gang. Wish SY Lee & gang the best for the OBA dinner.

Hi SB Ng, it would be nice to meet at this Saturday dinner. Please get my email address / mobile number from ika so that we can arrange to meet up, even if briefly.

Hi AP, what a shame that you have to miss out on this year’s dinner! We can meet up in November, together with Mano, etc if you have the time. It did occur to me that the image was more of Nicky than Eddy. I will convey your regards to SY Lee & Co.

No alumni of ACS would and could forget the late Mr. Quah Guan Teik! How is it that we do not have a photograph of him despite the many excursions he led! I went with him mostly to watch football matches in Merdeka Stadium in Kuala Lumpur. I remembered watching Real Madrid played Malaya selctions there. The trip was just to the stadium, sat there long before the game started and back to Ipoh immediately after the game! Wow! It is a pity I could not join the Reunion Dinner this Saturday as I just had my bilateral hip join… Read more »

Hi [email protected] Thanks for the wishes. Hope you can join us one of these days or the dinner next year.

I remember on one of the trips to Cameron Highlands and someone stole my cabbage. I complained to Mr. Quah but the cabbage was not found.

Mr Quah Kuan Teik (God bless his heart) was a man of strong principle. He taught me Religious Knowledge at ACS (early 1960s)and used to warn us about the dangers of being associated with thugs and gangsters. He was so enthusiastic that it was a danger sitting too close to him; better bring an umbrella. But all in all, he had a message and I remembered one incident when he scolded a class mate of mine and he looked at him in an arrogant way. Mr Quah’s comment was “Aiyaa, your face looks like a gangster.” Enough said- Thugs and… Read more »

Hi CK Leong, I am not too aware that Mr Quah was of the Christian faith. My impression was that he wasn’t. It was a testimony to the open mindedness of those days that one could teach RK which was centred on the various gospels and testaments without being a Christian. Many of us who were in the mission school [ACS Ipoh] went to chapel every Friday, took RK as an examination subject and participated in Church-affiliated activities without being an adherent. If anything, with such exposure, we were the better and richer in our upbringing. We became more tolerant… Read more »

Mr Quah was my form teacher in Form 3 and also taught me Geography as well.
He was a soft-hearted man and many a time tears welled in his eyes when he pleaded with us to behave. I don’t remember him ever raising his voice to us and we boys were no angels. Even when annoyed, he just showed his disapproval followed by his long-winded homily.

Hi LMS 136
I don’t think Mr Quah was a Christian in the sense of having a life relationship with Christ but he was certainly principled in a Confucius manner. There are teachers who leave a lasting impression on young minds and he was one that did that in a positive manner.

Thanks for the insight. Hear, hear, I agree absolutely with your assessment of Mr Quah.