…..folks in Ipoh witnessed the 9-Goddess Celebrations. The procession passed through one of Ipoh’s busiest roads, back in 1982/83. 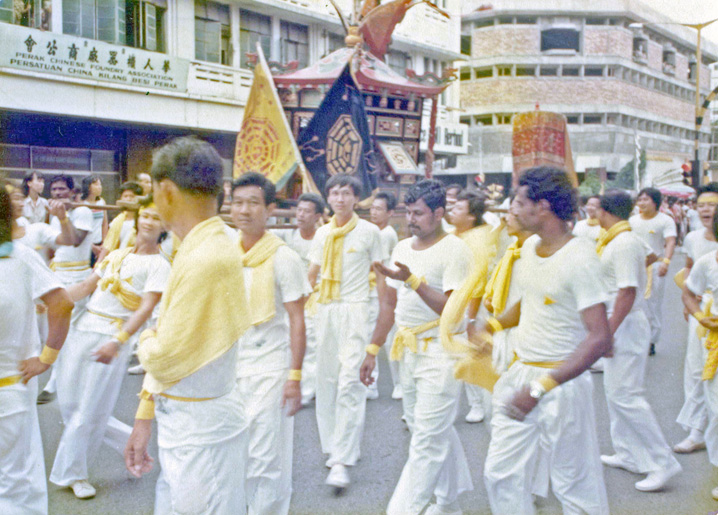 As you can see in this picture, they are passing by the Perak Chinese Foundry Association (building on the left). Anyone have any idea about the other building in the background – the one under construction?

Here’s another picture of the procession. 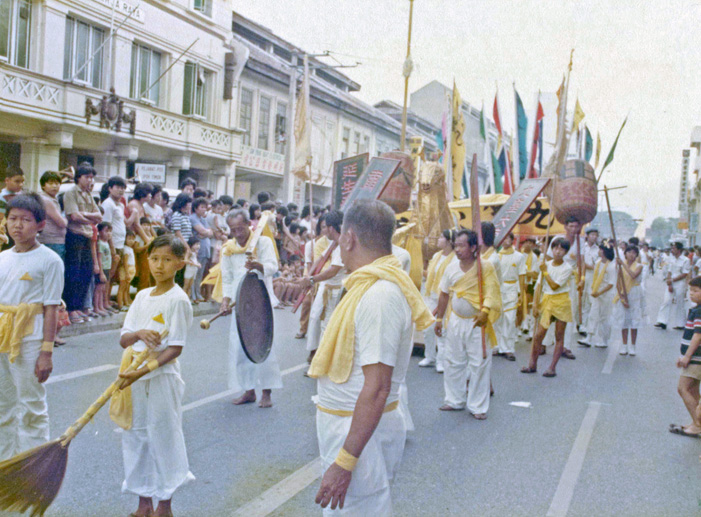 In this picture you can see the crowd standing at the sidewalk. And for those of you who (still) don’t recognise this street – check out the building on the left: yes, it is none other than the Times of Malaya building!

….that the first Elim Gospel Hall was built in 1920? As the assembly increased in number, a bigger hall was needed – there was also the idea of having separate halls for the Chinese and English speaking assemblies as well.

The picture we have here is of the first building (1920) which was built by none other than C H LaBrooy. Made of half wood and half concrete, the building was later torn down in 2002 to make way for the Chinese Assembly Library, Office and Conference Halls.

This cute picture is from Shuen Huey Foo, of Ipoh. Recognise this place? 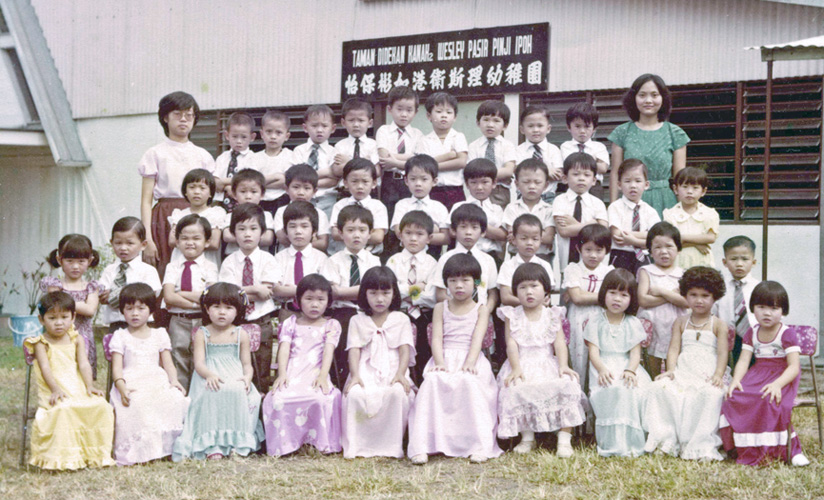 I’m guessing this was probably in the early 1980s (could be wrong, though). Is this kindergarten still around? Was it another branch of the Wesley Kindergarten along Lahat Road?

You tell us 🙂 Perhaps, someone in this picture remembers his/her face and could tell us more?

The Silibin Church and the Heritage Gallery

Today we’re featuring the Church of Our Lady of Lourdes, which is along Silibin Road. Long before the idea of a church in Silibin came about, the needs of the Tamil Catholics of Ipoh were taken care of by visiting missionaries of St Michael’s Church. Later on, more families began to settle towards Silibin area – thus the need for a proper building for Sunday worship rose. More on the church’s history can be found here. 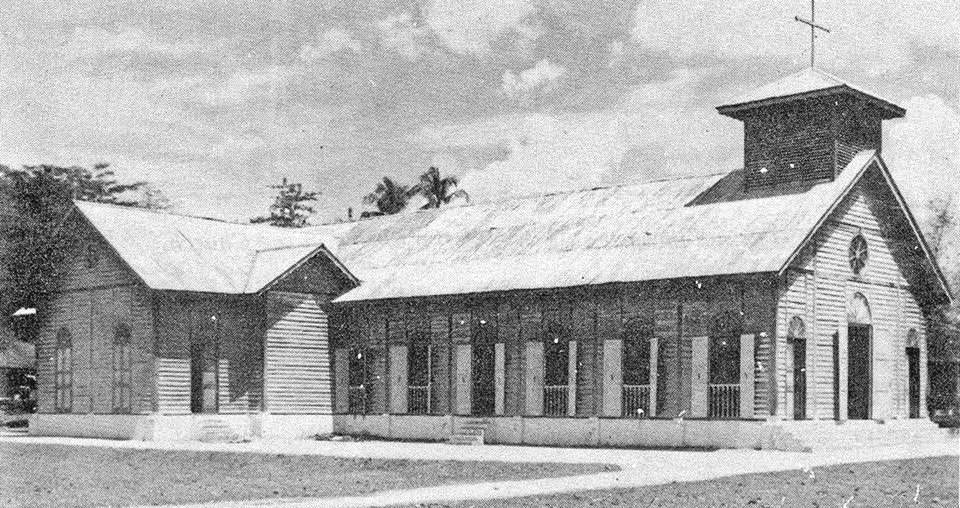 This picture shows the first building, way back in 1905. 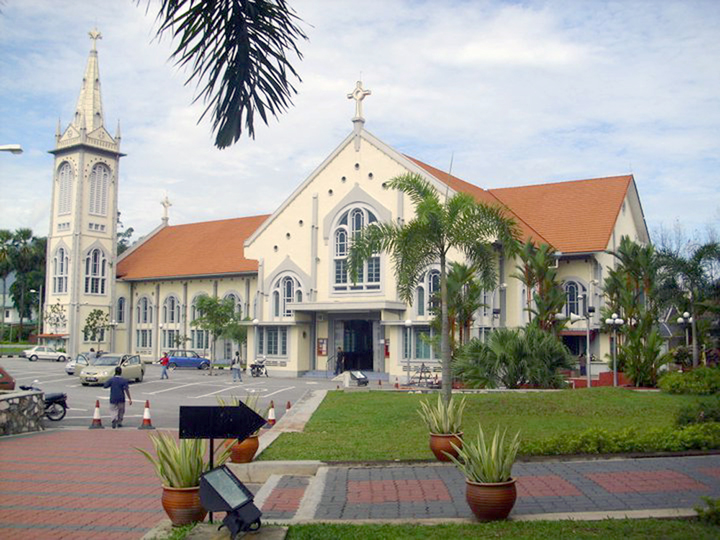 This 2010 picture shows the church as it stands today. The picture was taken from the ‘Bernadette Centre’ – a new building within the church grounds, which consists of the church office, classrooms/meeting rooms and more recently a Heritage Gallery. The Heritage Gallery, which is open from 10am to 5pm daily, has a unique collection of memorabilia dating back to the early 19th Century.

For more on this gallery, the following web links may assist you:

We’d like to thank Alexandar for the photographs and the above links.

Something for the Andersonians! 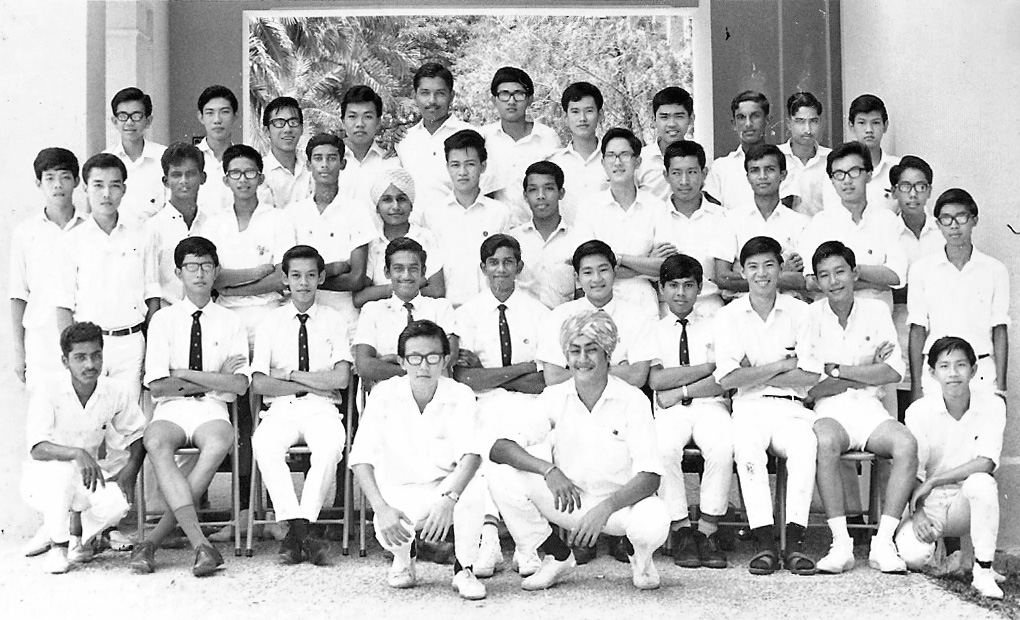 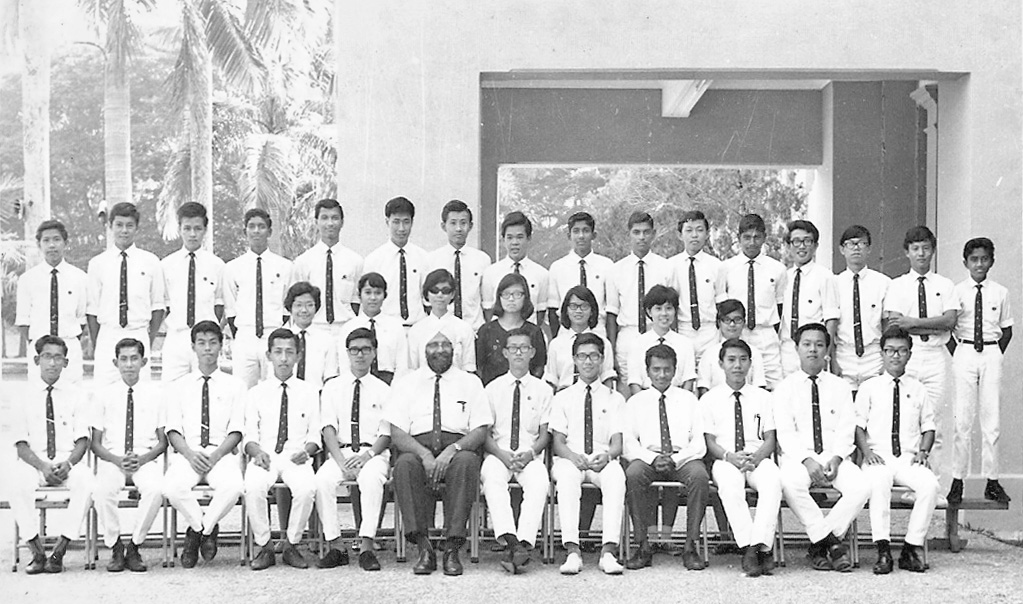 The top picture is said to be Form 5 Science, back in 1967. The bottom one is the Anderson School Library Prefectorial Board, also from 1967. Do you see yourself in any/both of these pictures? We’d like to hear from you – perhaps tell us a tale or two about your years at Anderson School, Ipoh 🙂

We’d like to thank Lai Wai Mun for these two pictures. 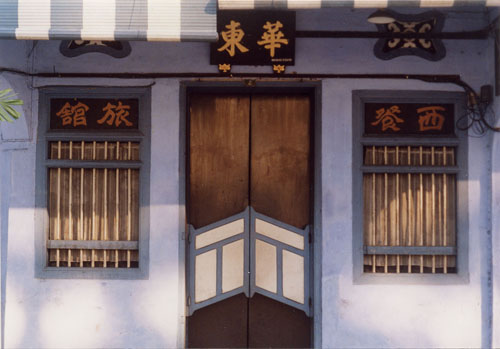 But can anyone tell us when they will open again please. The world misses this famous hostelry which has been closed for restoration since 1 March 2008 – almost 4 years!

But what a night the 29th February was – the last night. Were you there?

By the way, for more photos of this grand old building and its history I have just put up a new album on our Facebook page.

Can You Guess WHERE It Is? 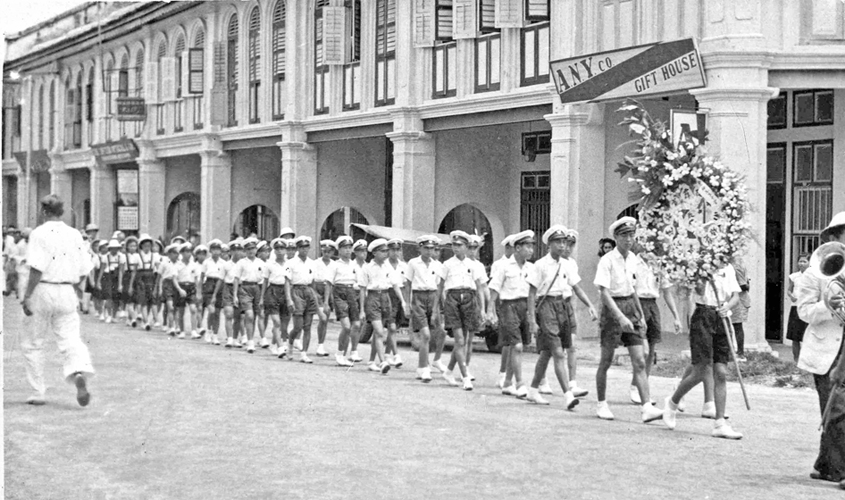 One look at this picture (click to enlarge), and I’m sure many of you out there are already grinning – yes, this is a VERY familiar street in Ipoh 🙂 But what we’d like to know more about is the shop in the background (far right) – ‘Any & Co Gift House’. What’s become of this shop?

We thank the Yeoh family for this picture – which is actually part of the Funeral Procession of the late Yeoh Kuon Joo, back in 1947.

The ‘Singout’, Organised by MGS 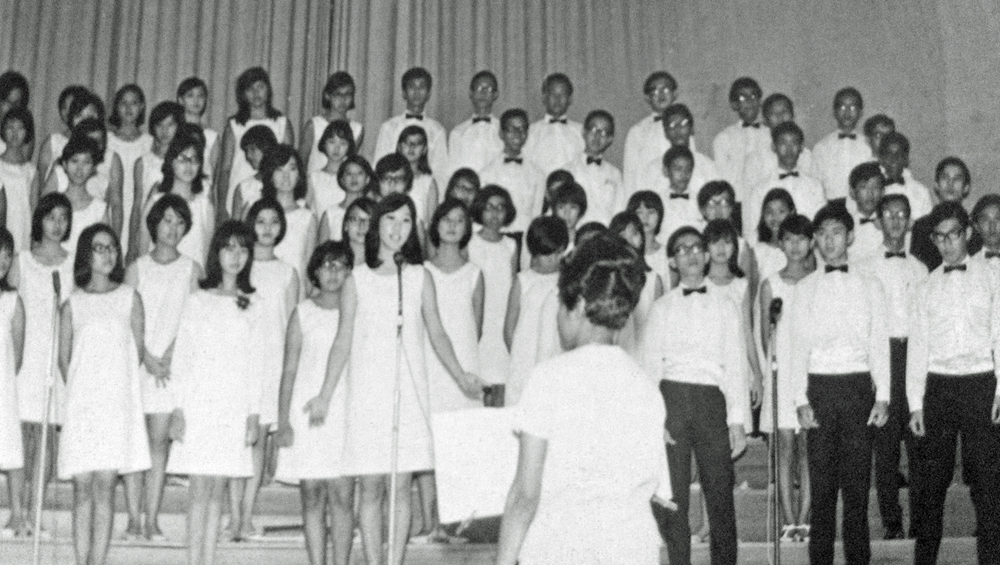 We received these interesting pictures from Ralph Khaw (from Perth, Australia). He also emailed us a short explanation for the above pictures:

“I can’t remember the date of the singout organised in MGS , involving students from MGS,ACS,SMI. I played a small part as a member of Choir. The teacher singing is Eddie Chin,teacher of MGS. One of female lead singer is Lim Siok Kim.( who later became my
sister-in-law and now residing in St Albans,UK). Miss Devi was the teacher and conductor/director of the musical “Sing-out”. A few months later it was performed in KL, due to its popularity but can’t remember the hall /venue. I can’t remember the name of the other female lead singer. The songs were from Oklahoma, and a few musical plays.

According to Ralph, he was also in this choir (back row, top from right). Anyone remember this singout? It couldn’t have been that long ago. Perhaps, some of the singers are reading this now? DO tell us MORE about this singout 🙂

A Visit to the Corner Shop 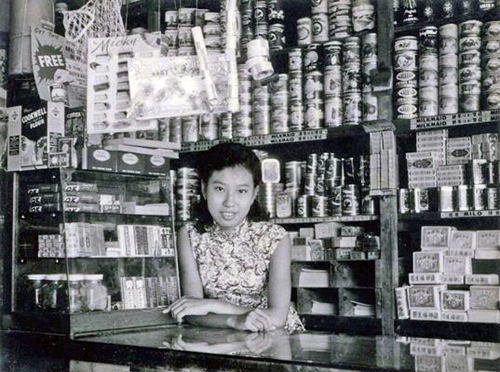 Yes those were the days when popping round the corner to buy a few groceries was a pleasure for there was always a friendly face behind the counter with time to chat. So different to the coldly efficient supermarkets of today.

But what was your corner shop like? Any memories? 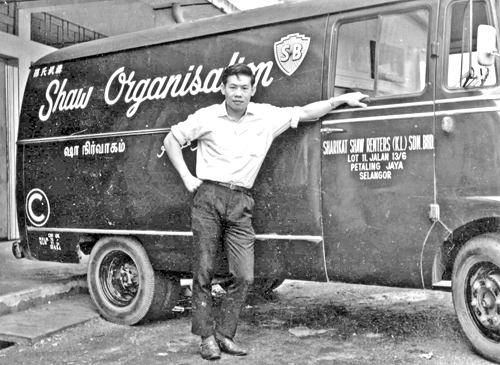 Anyone remember this van? Was this the van that delivered movie reels to the various Shaw cinemas? Or, perhaps this van was used for advertising?

We think that the man in the photo is the father of Shuen Huey Foo (our donor). Thanks Huey Foo 🙂 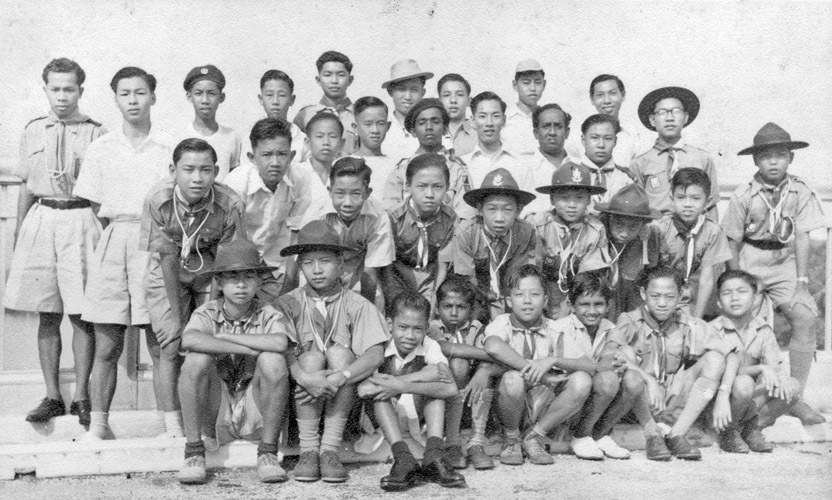 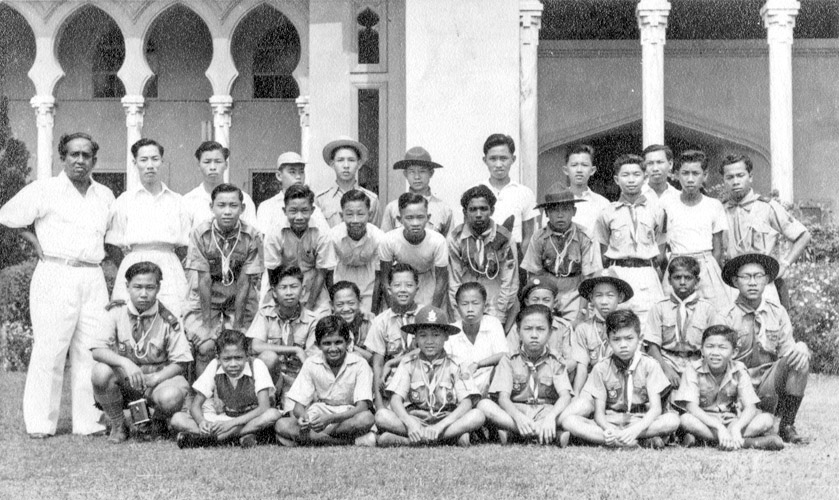 Our donor Chooi Lau Fai had this to say, regarding these pictures:

“Both photos were taken in either 1952 or 1953. The scout master was Mr Sohor. The first photo was taken on the Iskandar Bridge on our way to the Istana Kuala Kangsar. The second photo was taken in the grounds of the Istana. Back then, some of us did not even have the money to buy scout uniforms.”

Note: The students in both photos were said to be from the ACCS (Anglo Chinese Continuous School), later known as the Methodist Afternoon School. 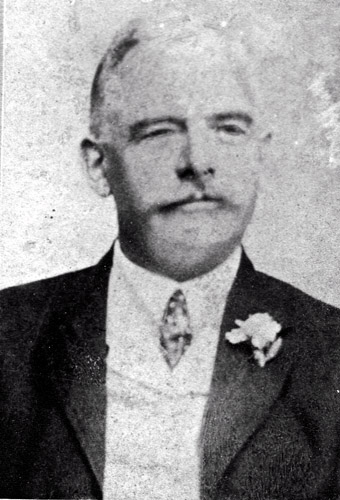 We have here the story of Frederick Kersey Jennings, which was the father of J A S Jennings – the Editor of Times of Malaya. This was sent to us by Nicholas Jennings of Toronto, Canada. Nicholas introduces the following article thus:

“Here is a biographical history of my great grandfather, with photos. Although FK is not directly related to Ipoh, he was active throughout Malaya as both a police officer and inspector as well as, later, a travel agent and guide. He may have visited Ipoh at some point, as he was posted in Penang for certain stretches of time. Of course, his main connection to Ipoh comes from being the father of JAS Jennings!”

F.K. was the younger of two sons born in Norfolk, England to William Howes Dundas Jennings, a customs officer for Inland Revenue, and his wife, Anna-Maria Pitts. At a very early age, he joined the Merchant Navy and began a life of adventure on the high seas. It is not known for certain whether his travels with the navy took him to the Far East, but when he was still in his teens he settled in Singapore.

His wife, Mary Stuart, insisted that he quit the Merchant Navy as a condition of marriage. According to family legend, she said with Scottish bluntness:

“Fred, I’ll no marry you unless you leave the sea!”

At the age of 19, F.K. became a member of the Singapore Volunteer Rifles. The Rifles that had been launched 10 years earlier, in 1864, with the support of the Governor, Colonel J. Butterworth, when the outbreak of riots between Chinese secret societies required the formation of a volunteer force to booster internal security.

When Jennings joined the Singapore police, criminal gangs within the secret societies were still rampant and their activities kept the force busy. By 1875, he was promoted to corporal and dispatched a battalion of the East Kent Regiment (the Buffs) to fight in the Perak War while he stayed behind to continue serving in Singapore with four artillery men.

F.K. soon saw action himself the following year, when he was part of the force that quelled the so-called Chinese Post Office Riots of 1876. The colonial government had established a new post office to handle letters and remittances to China. But the local Chinese community, preferring the letter-forwarding business of the towkays (businessmen), rejected this. Incited by the Ghee Hin secret society, the community launched a violent protest and attempted to demolish the new post office. While police battled rioters on New Market Road, Jennings had charge of the Cavanagh Bridge, preventing other protesters from joining the riots.

During his time with the police force, F.K. received a number of promotions and served in other parts of Malaya, including Penang and Malacca, off and on for a number of years. Following his transfer to Penang as sub-inspector, the Penang Daily Times in 1880 commended his “zeal and efficiency” in the capture of a local murderer. Always publicly minded, during his time in Penang he produced a pamphlet containing distances and fares within the town as a service to residents in dealing with hack gharry (taxi) drivers. He also served as warden master elect of the Royal Prince of Wales Lodge (freemasons).

By 1890, Jennings was back in Singapore as Inspector. That year, he also had personal charge of Russian Prince Nicholas, the Czarevitch, during his visit to the region. The prince later sent him a diamond ring as thanks for his service.

But F.K.’s work continued to involve him in high-profile crimes. One such case found him investigating the grisly murder of a Burmese man, who had been stabbed repeatedly in the heart after a disturbance at a local shop-house. He also led a major raid on a large gambling club and arrested 18 inhabitants who the press described as towkays, clerks and bill collectors.

Jennings didn’t play favorites in the line of duty. A report in 1896 tells of how the Inspector took even a man as powerful as Arnot Reid, a prominent Singapore newspaper journalist, to task, charging him with assault…

For the rest of this article, please click here. 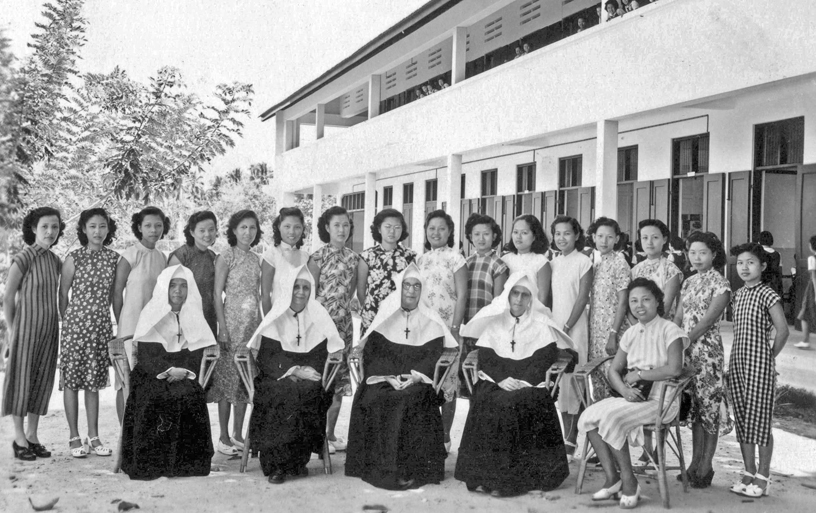 This one should bring back some memories 🙂

Can any of you guess what year it is? What about those in the picture? Were they your teachers? (click to enlarge)

We’d like to thank Shuen Huey Foo, from Ipoh, for this picture. 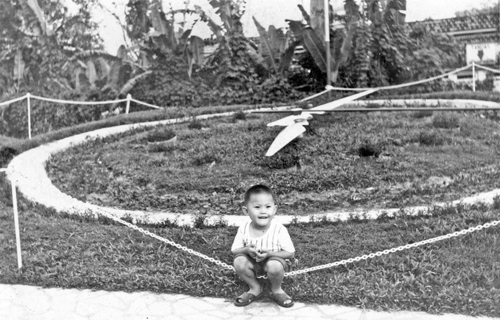 This picture here was probably taken in the late 1960s or so. I’m just curious: did the clock (behind the little boy) actually work or was it just part of the garden’s landscape? If it did run, is it still there now?

Anyone been to the Japanese Garden lately? Do let us know 🙂