Who Would Have Guessed…

Who Would Have Guessed…

…that this was Pasir Puteh back in the 1960s? Yes, take a GOOD LOOK at the pictures below 🙂 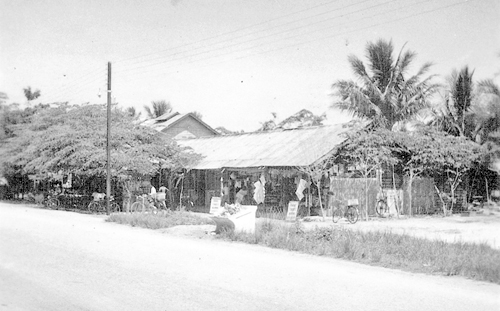 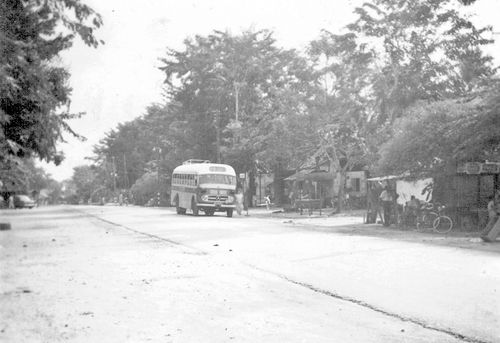 These pictures were provided by Mano, while SK gave us a little write-up:

The Sundry shop, Tong Huat which was opposite Mano house diagonally had a coffee shop where the coffee shop owner had a shining bald head like marble top. We used to have coffee there & my father would pour the coffee onto the sauce plate for us to drink as it would get cooler & faster this way. Lat drew this in his cartoon. I liked the noodle  &  the bean curd  pieces which was wrapped in mengkuang & fish paste ( foo peh ) Just in front of  Tong Huat Sundry Shop , there was a man selling a round pan kueh made of flour, margarine & grounded nuts ( Tai Kow Meen ).

Opposite the road would be a bicycle shop where we watched the Black & White TV of Man landing on the moon. This is the part I am not too sure. It stated the 1st landing on the moon was July, 1969 but I recalled it was much earlier. Unless it was something significant, maybe 1965 or 1966 as I shifted to Jalan Pasir Puteh, near Jalan Pasir Puteh School in 1967. I remember standing outside the bicycle shop with my brothers & neighbours watching the event as only a few household had TV & this one was for public viewing unlike now where public viewing is catered for football fans in mamak shops.

Coming to the date of watching landing on the moon on TV in front of the bicycle shop, since it was July 1969, which I had left New Pasir Puteh, it could be the first American man that came out from the capsule walking in space then.

NASA – National Aeronautics and Space Administration … the Gemini 4 mission on June 3, 1965, Ed White became the first American to conduct a spacewalk. This was more likely. I was still in 429A, New Pasir Puteh.

On the left side of Tong huat, after a break road from Tong Huat, was this factory making Coconut Candy. Remember the ice ball which cost us only 5 cents. The ice-seller would roll it & put the sugar coating & at times, she would put some read beans inside the middle. If we sucked the coating too fast, we have to throw the ice ball away as the sugar coating had not reached the middle. Yeah, I think the Indian Shop owner was a shame to cheat young boys. Next to the shop was the barber where we cut our hairs. I think there was one Indian grocery shop along the same row.

The end shop Picture No 1, there was a corner bungalow with a big compound occupied by a Malay Family. One of the daughter’s name was ” Puteh”. There was also a small road leading inside Lat’s Kampong & in that row of houses, which was where the Ham brothers lived. (The Fabulous Falcons)

All these were gone when I visited these places a few months ago. A complete change & if Mano picture had not captured it, that moment would be gone with the wind.